Putting the "Why?" in Wyoming 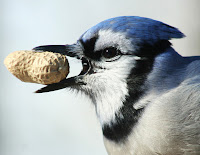 Anonymous "Blog" Buddy Informant J2 has come through with a response to our recent request for stories about the very few states of the United States not yet mentioned on the "blog." Warning! It is a grim story (hence the plaintive "Why?" in the title of this "post")! While such a tale is not entirely alien to the "blog," it is rare, given our routinely - some might say "desperately" - cheery frame of mind. Okay! You have been warned. And now, a "tale of Wyoming," as she calls it, courtesy of Informant J2: "I was participating in a family vacation to Yellowstone. My dad ran over an osprey. Actually, the osprey flew into the windshield of our moving vehicle. The bird's wingspan spread across the length of the windshield, its body pausing there a moment before tumbling over the top of the car and out of sight. It was nighttime and very dark; neither party saw it coming. After we stopped screaming, my mother said it was lucky the osprey didn't crack the windshield. The next day we went to some type of nature house where they had on display an estimated tally of all the wildlife killed by park visitors so far that year. I think the ospreys were around 20, so it's not like we were the only ones to ever do this. Also, ospreys have been evaluated as 'Least Concern' by the IUCN Red List, so its not even an endangered animal. Not that that makes it any better, but you learn to repeat these things to yourself post-osprey execution." Six states to go! Informant J2 has done her part. The rest of you get cracking.
Posted by Jack Pendarvis at 1:05 PM