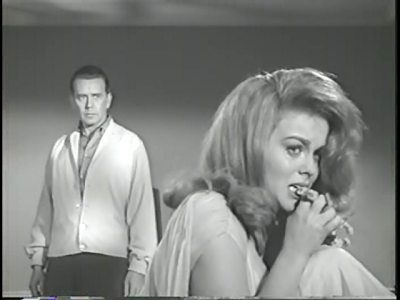 John Forsythe died. I tried to call McNeil. McNeil and I have been discussing KITTEN WITH A WHIP a lot recently - the Ann-Margret vehicle also starring Mr. Forsythe. We like it, we were saying, and not in a funny cutesy ha-ha ironic I'm glad we're all so smart now way. Yes, a non-random illustration is called for - nay, is demanded. KITTEN WITH A WHIP is a wonderful nightmare you can't wake up from, and exemplifies the paralyzing fear of beatniks so often reflected upon by the "blog," most especially in 2010, the Year of Repressive Desublimation. Below, a hand-tinted lobby card featuring the menacing beatnik (center). I know he doesn't look like much of a beatnik, or very menacing, but trust me! I think he's even a nihilist, like in THE BIG LEBOWSKI. Hey, look, the discoloration makes it look as if he has three arms, but he doesn't - that's John Forsythe's arm - but wouldn't it be something if he did? It would be a whole different movie. And speaking of John Forsythe's appendages, the strange coloring almost makes it look as if John Forsythe's OTHER hand has been replaced by a robotic weapon. But I think that's just a water glass sitting on a table or something. Once again, whole different movie. 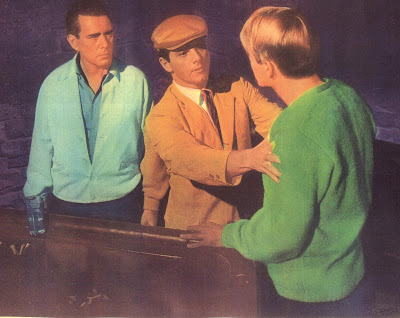 Posted by Jack Pendarvis at 1:37 PM