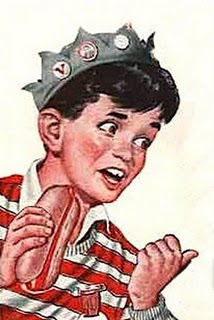 Okay, now back to random illustrations. And here is our final (?) installment about TV marketing sensation "The Ninja Blender." The NBIL, who of course first brought the Ninja Blender to our attention, was excited to see the remarkable device examined on a recent local news segment called, I believe, "Try It and Buy It." He sadly files this report: "The very first thing the TV folks did was load the Ninja full of ice and make some snow. Although the snow looked good, it proved to be pervaded by large chunks of ice! The guacamole that was next on the menu received rave reviews, but ice proved to be a problem once again with smoothies. Here's the kicker: although the blades were forged by ancient Japanese swordsmiths, the rest of the Ninja proved to be made of weaker stuff. On the very first use of the Ninja, bits of the plastic housing actually melted! It must have been the blue lightning. Needless to say, the Ninja received two thumbs down."
Posted by Jack Pendarvis at 10:19 AM