Scent of a Langford 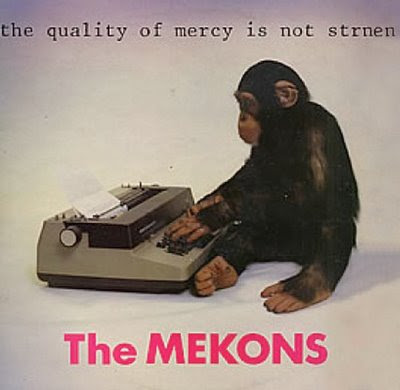 Jon Langford was in the air last night! First my neighbor (the mandolinist David Lonesome, who was providing the entertainment prior to my reading) mentioned him. I did not think of the next fact until this morning, when I "linked" to it in the previous "post," but Langford also did the artwork on the t-shirt I was wearing last night. More coincidences abound! I happened to have an extra copy of McSweeney's #34 (for details on that publication, "click" on the very first "link" in this "post"), so I decided to give it away in a contest last night. The trivia question was, "What was the name of the family cat in the novel PET SEMATARY by Stephen King?" (I should mention: the organizers of the event said I could read from whatever I wanted, so I read a lengthy passage from PET SEMATARY by Stephen King.) Someone shouted out the correct answer, which is "Church." The winner was none other than the Man Who Says "Palimpsest"! Is there anything he doesn't know? The Langford connection is that Langford's self-portrait appears in that issue. Later, the Man Who Says "Palimpsest" brought up Langford's band the Mekons. I cannot recall if this happened before or after that mention, but a friend of the "blog" who wishes to remain nameless revealed a tattoo of a rodeo rider based on Langford's design for the Sin Records label. So, much Langford. So much Langford. Langford was all around us. Here is another coincidence, unrelated. When, in the previous "post," I was searching for a "link" demonstrating some of my shim sham moves, I happened to find a clip of old-time Hollywood dance sensation Eleanor Powell, who is Dr. "M.'s" lookalike. Remarkable, because the "post" concerned itself a good deal with the subject of lookalikes. Speaking of which, my implications about Jack Black were needlessly critical. I have been looking at some pictures of him and he strikes me as a nice looking man, clearly much better looking than me. When I called him "a step up from Michael Moore," (among people like whom I have been told I look) I should have said "several thousand steps up from Michael Moore." I suppose I should also mention that students in not one but two of my classes have remarked upon my supposed similarity, in both appearance and mannerisms, to the comedian Patton Oswalt. If only a computer expert could meld together the visages of Patton Oswalt, Michael Moore, Jack Black, and Guillermo del Toro (and Max von Sydow????). Then I might find out what I truly look like. For some reason, I am reminded of a passage from the book I am reading for my special book club you can't be in: "A flash of lightning illuminated the object, and discovered its shape plainly to me; its gigantic stature, and the deformity of its aspect, more hideous than belongs to humanity, instantly informed me that it was the wretch, the filthy daemon to whom I had given life." PS: I found the above Mekons album cover whilst searching for Langford's Sin Records logo. Given the "blog's" love of monkeys, I could not resist adding it to my exploding computer.
Posted by Jack Pendarvis at 1:23 PM