Deal With Him, Hemingway! 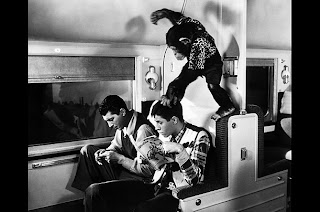 I would like to remind everyone that the illustrations on the "blog" are randomly chosen now for the most part, and such was the case with the photograph of James Joyce that popped up yesterday. It didn't occur to me until JUST NOW that there might be some connection inferred between the "Eye-Gougingly" in the title of the "post" and the fact that Joyce is wearing an eye patch in the accompanying portrait. I meant no disrespect! I did not mean to suggest that Joyce had had his eye gouged, nor did I mean to make light of his terrible eyesight and eventual blindness. That's not something that would occur to me nor strike me as funny. Now I am thinking of an anecdote from Richard Ellman's wonderful Joyce biography. This is Hemingway talking: "We would go out to drink and Joyce would fall into a fight. He couldn't even see the man so he'd say: 'Deal with him, Hemingway! Deal with him!'" Also, Joyce's wife Nora would tease him about the relative tameness of his subject matter when Hemingway was around, saying, "Jim could do with a spot of that lion-hunting."
Posted by Jack Pendarvis at 7:55 AM