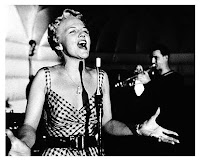 Ace Atkins was kind enough to speak to my hardboiled classes today. On the way to the second class, we stopped by the library coffee shop where they give away free books. Ace spotted one called BEYOND EXPLANATION? REMARKABLE ACCOUNTS ABOUT CELEBRITIES WHO HAVE WITNESSED THE SUPERNATURAL! (Exclamation point theirs.) Friends, he gave that book to me. That Ace! The back of the book promises information about "the Air Force base where Jackie Gleason was shown the bodies of aliens from outer space." Believe it or not (though why wouldn't you believe it? It's so typical) we have covered that story on the "blog" before. The copy goes on to promise other "unexplained phenomena" that happened to, and I quote, "James Dean, Abraham Lincoln, Gregory Peck, David Janssen, Henry Mancini, Sigmund Freud, Peggy Lee, Ernest Hemingway, Robert Stack and more..." you know, all the usual celebrities, listed in the logical order in which you would expect to find them. Speaking of celebrities, on our walk to campus, Ace told me about the time he ended up in the long-abandoned penthouse apartment of Sammy Davis, Jr., which still had its original snakeskin wallpaper hanging on the walls!
Posted by Jack Pendarvis at 1:17 PM