The Chicken and the Pig 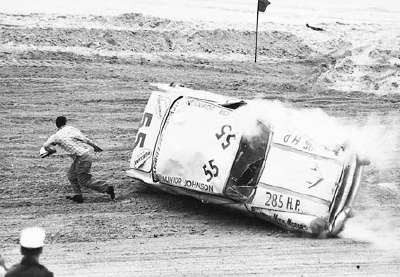 Looks like this weekend I'll be a small part of a Southern Foodways Symposium event featuring Great American Writer Barry Hannah and moonshine-hauling stock car pioneer and NASCAR forefather Junior Johnson (pictured), subject of a famous article by Tom Wolfe. My dad (whose birthday it is today, and who has raced a car or two in his time) will be in town, so there is a chance that I'll get to introduce him to Junior Johnson! When I called to wish Dad happy birthday, he told me a Junior Johnson story somebody had told him. In the story, Junior Johnson is being interviewed while eating ham and eggs. The interviewer asks him if he is "committed to" racing or just "involved." "Involved," says Johnson. He uses his breakfast as an example: "The chicken was involved, but the pig was committed." Maybe this story is true! Or maybe it's apocryphal. Maybe we'll find out! Or maybe we won't.
Posted by Jack Pendarvis at 7:08 AM