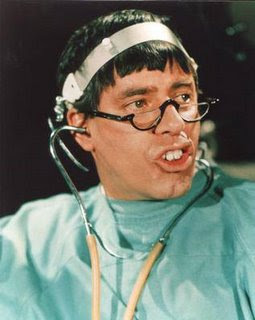 But think about it. Why do so many Jerry Lewis movies feature doctors engaged in questionable shenanigans? Just off the top of my head, there are THE NUTTY PROFESSOR, THREE ON A COUCH, CRACKING UP, THE DISORDERLY ORDERLY, LIVING IT UP, and HOOK, LINE AND SINKER. I guess a better question is, "Why are these things on the top of my head?" And "Are they really 'off' it now?" I hope so! Someone could do me a favor and write up the subject in a medical/cinematic journal if such a thing exists. Then maybe I'd stop worrying about it. Like, maybe I'll no longer wake up thinking, "Why does THREE ON A COUCH take place in a nihilistic moral and ethical void where human relationships are meaningless?" Here, I'll get you started with a quotation from TOAC you can use in the epigraph of the article you're going to write for me. A male doctor says to a female doctor, "You can take that Hippocratic Oath jazz too far. You have to decide: are you a woman or a doctor? From here you look like a woman, doctor." Something akin to misogyny, but even more insidious perhaps. And yet Jerry is great when he pretends to be the shy zoologist (whose long stream of double talk, in which he never finishes a sentence, hints at the comedic influence of Lewis on Fred Armisen). Are we allowed to extract that scene and enjoy it out of context? I guess I'll find out when I read your article! No kidding, I just did a little "googling" and found something called "The Journal of Medicine and Movies" where you can submit. So get on it.
Posted by Jack Pendarvis at 6:48 AM