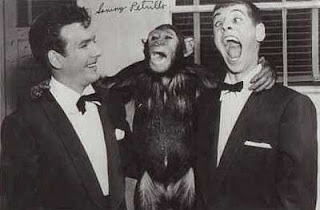 It is time once again for Literary Matters. Don't worry! There are just two. I know, that's still too many. I hate literary matters! We all do. But here we go. 1) Another Jerry Lewis reference in the New York Times (as you know, it is a pretty common thing, which delights me). This time it was in the Sunday Book Review, which I have read through the power of the "internet" even though today is only Saturday. The new Hernandez Brothers comic, it turns out, contains (as the reviewer puts it) "a free-associative fantasy about Dean Martin and Jerry Lewis look-alikes fighting a legion of aliens with spears." The reviewer doesn't seem to realize that the Dean and Jerry impersonators (Duke Mitchell and Sammy Petrillo, pictured above with chimpanzee) were real people, and that they were (quite rightfully) sued (or nearly sued) for copyright infringement (or something like it), I mean, just look at those mugs! 2) While I was at Square Books picking up my Hernandez Brothers, I noticed that the paperback version of Woody Allen's latest collection has come out. I opened it up and discovered that my review of it is quoted on the opening page with several others. (I use the word "feuilletoniste" in the quotation, which makes it extra "literary." Yes, I know, it makes me sick, too!)
Posted by Jack Pendarvis at 2:39 PM