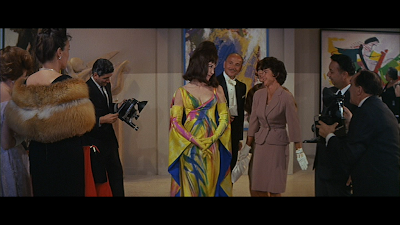 You heard it here first, folks, direct from the source! Readers of Laura Lippman's continuing serial in the New York Times Sunday magazine should keep their eyes peeled in the upcoming weeks for what Lippman calls "a longish discussion of the Shirley MacLaine vehicle WHAT A WAY TO GO!" (The exclamation point is neither mine nor Lippman's - it's in the title.) It should be noted that by the wildest of coincidences, WHAT A WAY TO GO! came up during my recent luncheon with Kelly Hogan, Kathleen Judge, and Neko Case. Will it therefore appear in my Oxford American article? Wait and see! This is not a scoop about me, it is a scoop about Lippman, whose highly anticipated discussion of WAWTG offers, in her words, "a new theory of cinema, involving the inverse relationship between a film's quality and the presence of a chimpanzee in said film." I believe one of us is misunderstanding the word "inverse." If Lippman means to suggest that anything with a chimp in it is awesome, I concur wholeheartedly! (Pictured, MacLaine in WHAT A WAY TO GO!, standing in front of some art made by the Paul Newman character - with the help, if I am recalling the plot correctly, of his wily chimpanzee. The point of a lot of movies and TV shows of the 1960s seemed to be that we are suckers for enjoying "modern" art because a chimp could make it - unlike movies and TV, as I suppose went the unspoken corollary. The teenage protagonist of my B+ novella "Your Body Is Changing" considers the situation as it has been presented to him in popular culture: "Henry knew that a lot of times people just pretended to like art so they could be cool. They would stand around and drink alcohol and eat weenies on toothpicks and make a big deal about some piece of junk that was supposed to be great art, but then it would turn out to be nothing but a knocked-over garbage can or a no-smoking sign or a spot on the floor where somebody had thrown up, which was a situation that Henry had observed in many comedy movies. Like the one where the supposedly great artist had trained a monkey to ride around on a tricycle with paint on the wheels, and that was how he had made his supposedly great art!" So you can see that I am torn. I love chimps in movies, yet I am not crazy about the way they are used to belittle the role of the artist in society! It is not the chimp's fault! Speaking of Paul Newman and chimps, he also appeared with one in another exclamation pointed title, RALLY 'ROUND THE FLAG, BOYS!, as has been noted on the "blog.")
Posted by Jack Pendarvis at 7:40 AM