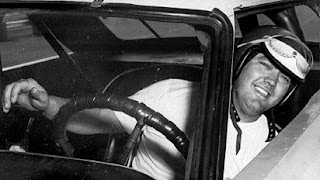 No, I'm not talking about who "really" wrote Shakespeare's plays. I'm just letting you know that my hopes materialized and I was able to introduce my father to Junior Johnson! Actually, it turned out the other way around. Dad met Mr. Johnson first and then introduced me. Not only that, but Dad and Junior Johnson had a long conversation, during which Dad ascertained the veracity of the ham and eggs story... yes, my Dad did something the Washington Post could not do! Mr. Johnson said that yes, indeed, he originated that saying. He was at a hotel restaurant with Bill France. France was trying to talk him into getting serious about racing (this must have been the 1940s) while Johnson was of the contrary opinion that moonshining was a much more lucrative and satisfying occupation. "I looked down at my plate and it just came to me," he told Dad this morning. Furthermore, and I think this really nails down the authenticity, he corrected a point: "It was bacon."
Posted by Jack Pendarvis at 10:56 AM