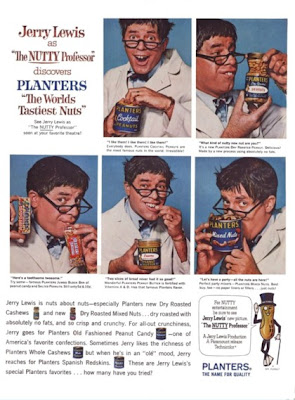 I believe that McNeil and I are in something like a book club. Except we are separately watching the same Jerry Lewis movie in ten-minute increments. So by most standards, that is not a book club. It's one of those movies, though. The ones you have to watch in ten-minute increments (unlike THE NUTTY PROFESSOR, represented misleadingly above, but in an ad which puts me in mind of the "squirrel-eating-nuts" gag with which Patrick Fischler is introduced as a Lewis-like character on MAD MEN). But no, the one we're pushing through is THREE ON A COUCH. There are high points and low points. You know. Like life. Like, McNeil will call and say, "This is the worst plot ever. And Janet Leigh and Jerry Lewis are wearing jackets made out of the same material. Must save money in the costume department." But then he might call back and say, "Are you at the part where Jerry dresses up like a cowboy? Some pretty ladies walk by and he does some classic Jerry shtick. Hilarious!" I haven't made it to that part.
Posted by Jack Pendarvis at 2:11 PM