A Young Dabney Coleman and Some Other Items of No Interest 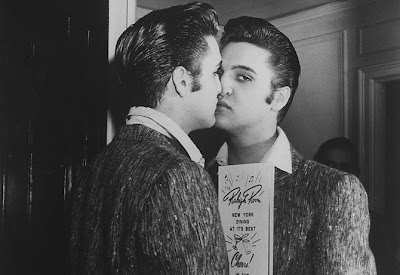 I thought I had discovered a really good Elvis movie to tell you about. But I had not. Some of you are snickering! You are saying, "A GOOD Elvis movie? PLEASE!" I invite you to stop reading at this point. Anyway, it fell apart at the end. But doesn't everything? Life, for example? It started falling apart pretty bad and then they sang a song about the signs of the zodiac and everything REALLY collapsed. But up until that point, I found many things to like. I will list them. 1) Vincent Price plays a lecturer named Mr. Morality! He quotes Hemingway, Nietzsche, and Whitman! 2) There's so much overlapping dialogue and so many elliptical vignettes featuring a large number of minor players that I began to think of it as Elvis's Altman movie. But it came out right before M*A*S*H, so maybe Altman got some of his ideas from this Elvis movie! Ha ha! Not really. But I thought I was onto something when I noticed that the director's name was Peter Tewksbury... because I remembered that the woman who wrote NASHVILLE for Altman was named Joan Tewkesbury. But they spell their names differently, as I learned through "Googling." There is no connection. Although "Google" did inform me that after Peter Tewksbury retired from directing, he went back to his birth name of Henry and wrote a book called THE CHEESES OF VERMONT (not to be confused with the cheese book we have mentioned on the "blog" before). Speaking of "Google," I would like to take time out from my list to mention the observation in Roy Blount Jr.'s ALPHABET JUICE that Mark Twain used the word "googling" in HUCKLEBERRY FINN. Here's the quotation, as relayed by Blount: "The duke he never let on he suspicioned what was up, but just went a goo-gooing around, happy and satisfied, like a jug that's googling out buttermilk." I keep meaning to e-mail Twain fan Maud Newton about this, but I'm certain she already knows. 3) Crazy camera moves and New Wave tricks. 4) Some mild attempts at social and political commentary. 5) A young Dabney Coleman (there's a phrase I never thought I'd use!) already fully formed into the murmuring, sarcastic lech that became his cinematic trademark. 6) For at least the first half of the movie, the musical numbers are handled in a subtle, believable way for an Elvis movie (which isn't saying much). 7) Elvis is kind of subdued and naturalistic in it. There, that's the list. Maybe you can turn off the movie halfway through and feel good about the world. Like, "Maybe everything's not terrible!" Like, "People try their best!" When I was about halfway through the movie, I consulted Peter Guralnick's masterful two-volume Elvis bio because I wanted some confirmation. I thought he'd be in this with me! But he was not. In fact, he was dismissive about the movie. Scornful, even. It's called THE TROUBLE WITH GIRLS, if you're interested. I know you're not! You're not even reading this! You gave up already because I can't do paragraph breaks. It's okay! I don't want your pity. Even Guralnick had to admit that Elvis looked great in the spiffy white suit he wore in most of the scenes. That's #8, I guess.
Posted by Jack Pendarvis at 8:02 AM