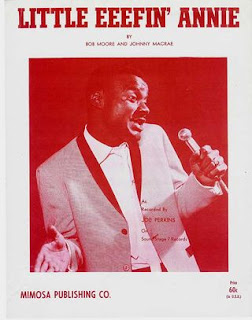 My smart student and I were discussing the art of the hambone yesterday, a term into which I erroneously lumped the vocal accompaniment, which I discovered today is its own separate thing called "eefing" or "eephing," or sometimes, excitingly, "eeefing" or "eeephing," that's right, with three E's. Jimmy Riddle, champion eefer, says in this audio recording that it used to be called hoodling before, I don't know, all the modern kids started to call it eefing. I went back for a "link" to last Thanksgiving, when naturally I put up a youtube video from HEE HAW on the "blog," but I discovered it had been removed by the Grand Ole Opry. But don't worry, folks, there is still plenty of eefing on the "internet," despite the sinister machinations of the Grand Ole Opry. I should have known that the great WFMU beat me to it anyway, using the same deleted clip, but supplementing it with many others and piling on the MP3s. All the eefing you could ever want, or at least a good start. Lots of pictures, too, including this non-random illustration. Most of the information I find on the "internet" refers to eefing as a white Appalachian tradition, but there are plenty of African-American examples, and I think the connection should be explored. Get on it, somebody! The piece that my student and I were originally discussing, "Old Aunt Dinah" (attributed to a performer named "Butterboy"), appears on a Lomax field recording called "Black Texicans."
Posted by Jack Pendarvis at 7:19 AM