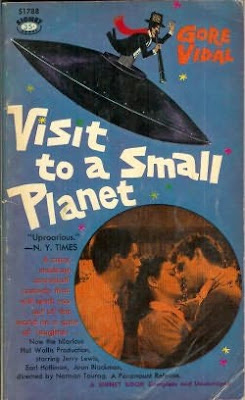 Hello! Welcome once again to our dreaded listing of "Literary Matters." As you know, sometimes our literary matters concern Jerry Lewis, which makes them ever so slightly more palatable. At such times we hilariously call them "LiterJerry Matters." Today there is one "LiterJerry Matter" and one thing that is not a "LiterJerry Matter." So get ready. 1) Laura Lippman would like to announce that she has dibs on "and you will sit on the dirty seats you create" as a title for something. I think to make the title extra classy you need to include the ellipsis from the original: "... and you will sit on the dirty seats you create." Don't you agree? Isn't it classier? With the dot dot dot? Laura thinks it sounds like Faulkner, or part of a Bible verse Faulkner would have quoted in a title. I agree! 2) An image of Jerry Lewis appears in the current issue of THE BELIEVER! He is represented on the cover of a movie-tie-in paperback edition of VISIT TO A SMALL PLANET by Gore Vidal. I'm sure Gore was thrilled. He's so easygoing! I am starting to think that THE BELIEVER is the nation's number one publication when it comes to mentioning Jerry. The New York Times does it a lot, sure, but the New York Times comes out every day, so really they are missing more opportunities than they are nabbing. THE BELIEVER comes out just ten times a year, I think, and they manage to mention Jerry pretty frequently, so when you do the math, I don't know. I'm not good at math.
Posted by Jack Pendarvis at 7:14 PM