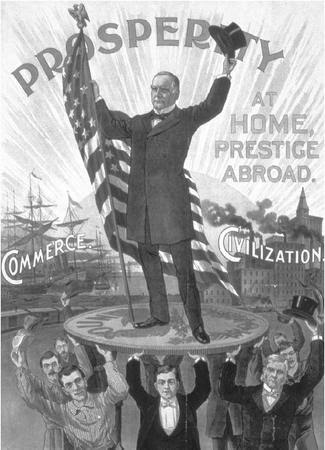 Yes, I know I have sworn off "blogging" for the "rest of June." But something unusual has happened: the transmission of a new edition of Mr. Ward's Presidential Korner IN PERSON! And I have to write it down before I forget. Okay. First, on Wednesday evening in NYC, I was happy to participate in Amanda Stern's reading series down on Broome St. There is always a musician involved - in this case, a Mr. Jamie Barnes, hailing from Kentucky, who introduced one of his songs by announcing that it was "about the assassination of William McKinley." I had lunch with Mr. Ward the next day (he works in the city) and told him about the song. You know how he loves his presidents! So Mr. Ward said, "I bet it had this line in it: 'Be careful how you tell her.'" I was astonished! I said, "Yes, I believe that was the first line of the song. How did you know?" And Mr. Ward explained that President McKinley said as much after he was shot, referring to his wife, who was prone to seizures. Then Mr. Ward went on to tell me that sometimes, in the middle of a state dinner, Mrs. McKinley would have a seizure and the President would reach over and place a napkin over her head! The purpose was to keep people from being distracted by her contorted features! But it seems to me that a napkin over her head would be something else to notice. Then again, I am not the President of the United States!
Posted by Jack Pendarvis at 7:17 AM