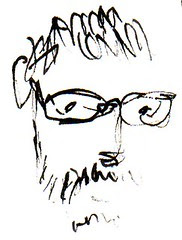 This (pictured) is what I look like according to the people at Jamie Allen's "blog." Kind of like Max Von Sydow in one of his more harrowing performances for Ingmar Bergman! The fellow who sketched me also provides a report on my reading last night. It seems more or less accurate, except for the fact that I would ask everyone to "lie down," not "lay down," which is not very grammatical. As for my pronunciation of gazebo, the whole point of that little hiccup was that my brain suddenly went blank. Hasn't that ever happened to you? You see a word you have been saying for your entire life (although I do go for long stretches without saying "gazebo" out loud) and suddenly it seems unfamiliar and strange? Right? As for my exhortation to the "gentlemen" in the audience, I am not sure the reporter makes it clear that there were many women required to stand while men sat at their leisure (I'm looking at you, Phil Oppenheim!). Finally, on the subject of Helicopter Island (another reference in that report on Jamie Allen's "blog"): one attendee believed that my fictional character who mentions Helicopter Island was making an oblique reference to the TV show LOST. Not true! I wrote that story a long time before I had even seen an episode of LOST, perhaps before LOST was even on the air, and certainly before a ********* almost reached the island, which occurred only a few weeks ago. I hope this clears everything up! Thanks to everyone who came out to my reading. I will try to do better in the future!
Posted by Jack Pendarvis at 3:15 PM