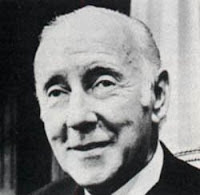 Okay! Just in case I do have the attention of Robert Osborne, as my demented speculations suggest, I am going to lay out very clearly all the reasons I should be a guest programmer on TCM. 1) My Cartoon Network project has gone belly up, so there is no conceivable conflict of interest within the Turner empire. 2) I watch TCM all the time, as evidenced - to give but one paltry example - by numerous "blog" references to Guy Kibbee. 3) I often write "literature" in which movies play a role. For example, one character in the title novella of my first book has a nightmare about Dean Martin. In real life, I once had a nightmare after watching the Martin film ADA on TCM... but my nightmare involved not Mr. Martin, but Wilfrid Hyde-White (pictured), who played the villain in the piece. Do you hear me? I actually have nightmares about Wilfrid Hyde White! See? Just the fact that I know who Wilfrid Hyde-White IS should get me a spot on TCM! 4) I have written about movies in a magazine. 5) I don't know if you are located in Los Angeles or New York, but you can set up a "shoot" on June 14th because I have most of that day free in New York... or the same goes for June 22nd in L.A. Great! So have your people call my people and we'll get this thing rolling!
Posted by Jack Pendarvis at 4:30 AM