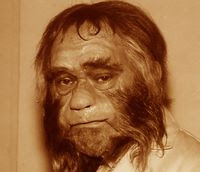 This calls for a non-random picture! A non-random picture of Edward G. Robinson dressed up as a monkey! A friend of the "blog" has directed us to WFMU's "web" site (previously celebrated for its unparalleled knowledge of "blog" icon Arnold Stang), where you can watch Mr. Robinson's PLANET OF THE APES screen test. This marks the long-awaited return of monkeys to the "blog." You will note that the "blog's" subhead announces four official areas of interest: Jerry Lewis, monkeys, UFOs, and oatmeal. Yet in October, while there were 15 instances of the word "Jerry" (impressive until one takes into account the fact that it represents a troubling 50% drop from September!) all monkey references were confined to a SINGLE "POST," and that on the first day of the month, after which monkeys were not heard from again - until now. UFOs and oatmeal fared even worse in October. There was not a single mention of UFOs, unless one counts Charles Fort's "unknown objects in space." In fact, despite a handful of oblique references in recent months, UFOs have not been referred to BY NAME since June! As for oatmeal, it made no October appearance apart from the sobriquet of the girl who eats dry oatmeal.
Posted by Jack Pendarvis at 9:35 AM