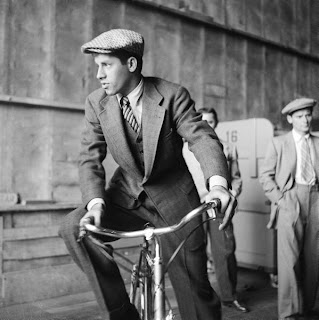 There was a Jerry Lewis reference on THE SIMPSONS tonight. Homer said, "I've been acting like telethon Jerry Lewis when I should have been acting like rest-of-the-year Jerry Lewis!" Then I was watching Elvis Costello's talk show. Did you know that Elvis Costello has a talk show? Well he does. And did you know that there's a picture of me having dinner with Elvis Costello? I just wanted to make sure! But the important thing is that I was watching the Elvis Costello talk show via dvr and guest Bruce Springsteen cited Jerry Lewis as an influence. To be thorough, I should say that Mr. Springsteen cited Dean Martin and Jerry Lewis as influences, but then avowed that he did not know with which of the pair to equate himself most. (Once again, our illustration is randomly chosen in keeping with our new rules but turns out to be appropriate anyway.)
Posted by Jack Pendarvis at 6:34 PM