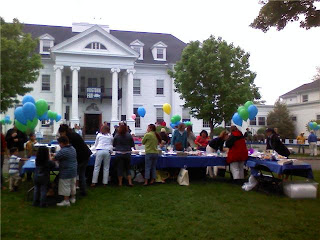 The other day I read this in a book called NAMES ON THE LAND: "The name sounded to the English in such a way that they wrote it down at first as Quinetucquet or Quenticutt. Finally they wrote it Connecticut, although no one knows who first put in the extra c, or why - for none who have lived there, Indian or English, have pronounced it." See, the thing is I know a guy who says all the c's in Connecticut! For real! He is not being funny. He does it with such aplomb and easy conviction that I was starting to think I was crazy. Like, "I am so uncool I don't even say all the c's in Connecticut." But I am happy to know I am not crazy according to George R. Stewart, the late author of NAMES ON THE LAND. Do you know someone who says all the c's in Connecticut? Why not write and tell me about it? "Connecticut" c/o "Writer" Oxford, MS 38655. (PS! By a crazy coincidence, today's randomly chosen illustration is a photograph taken by McNeil in Connecticut! Crazy!)
Posted by Jack Pendarvis at 7:51 PM