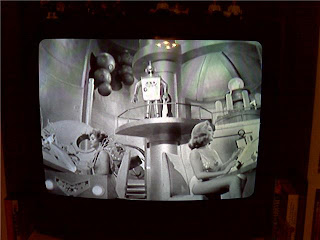 While I was locked out of the house today I was thinking about how great Jerry Lewis would be in the Samuel Beckett play KRAPP'S LAST TAPE. I am not trying to be funny, so shut up. Take a gander at these stage directions, among the first in the play: "takes out a large banana, peers at it... strokes banana, peels it, drops skin at his feet, puts end of banana in his mouth and remains motionless, staring vacuously before him." Come on! It's pure Jerry, you have to admit. And a few minutes later, Krapp slips on the banana peel! It's in the stage directions! Jerry's at the right age to play it. He may be a little old for the part, even, but it calls for an old man. To make it perfect, someone should have recorded Jerry's voice back in 1965 or so, doing young Krapp's monologue that old Krapp listens to on a tape. I'm fairly certain no one had the foresight. Oh well. It would have been poignant! Old Jerry listening to young Jerry and all. Maybe we could piece together young Krapp's monologue word by word from old Jerry movies!
Posted by Jack Pendarvis at 4:08 PM