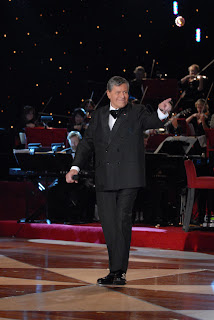 I am happy to report that last night while I was eating raw oysters on a porch with John T. Edge and Blair Hobbs and some others, Blair spontaneously broke into a Jerry Lewis imitation WITH NO PRIOR PROMPTING FROM ME, not even a Jerry reference on my part. (You may recall that Blair finds Jerry handsome, as first reported on the "blog.") Of course, her Jerry impression caused me to shoot one back, yes, we were like unto a pair of songbirds calling to one another in the forest. In other Jerry-and-the-ladies news, Laura Lippman reports that her screening of FUNNY BONES yesterday was a big success. Be sure to watch the Craig Ferguson show on Thursday night, by the way... Laura will be a guest! Will she find a reason to mention Jerry? Most likely not. But a boy can dream.
Posted by Jack Pendarvis at 11:38 AM