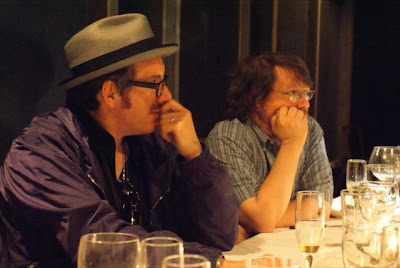 Don't freak out! Yes, that's my musical idol Elvis Costello and me, apparently just hanging out. I would like you to believe on the evidence of this picture that it is no big deal and happens all the time and I didn't feel faint and giddy. You will note that our table manners are appalling in the exact same way, which is vastly satisfying somehow. I can say no more because Theresa finds such self-aggrandizement and exploitation tacky. And she's right! But if you have a "blog," this is the kind of stuff that goes on it. The "blog" demands much! The "blog" consumes and destroys! "Blogs" are tacky! Get with the times! Print is dead! etc. I also have a picture from the same night (last night) in which Theresa looks like a ghost. She's semi-transparent for some reason! It's really cool but you'll never see it because that's how Theresa rolls.
Posted by Jack Pendarvis at 11:09 AM