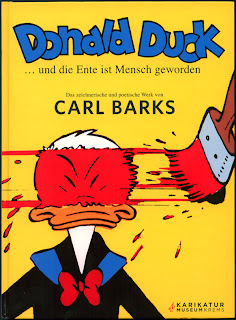 As a fan of Robert Walser and the classic Donald Duck books of the visionary Carl Barks, I was interested in an anonymous tip I received here at the "blog" - namely, that the author of a critical biography of Walser has an article about Donald Duck in the Wall Street Journal. It's a very good and enjoyable article, quite interesting on the subject of Donald Duck's main German translator ("Erika Fuchs, a free spirit in owlish glasses," as she is wonderfully described), but the Jerry Lewis reference is the kind I have been campaigning against. I hope it won't be rude in the face of such fine work on the writer's part - the article is very worthwhile! - if I once again point out that "the French love Jerry Lewis" is the most exhausted and meaningless of filler, not a clever thing to say, and somehow a favorite fallback of newspaper reporters everywhere. Sorry to harp on it! But as I've made it a cornerstone of the "blog," I am duty bound to mention it, even in conjunction with such a pleasurable piece of work.
Posted by Jack Pendarvis at 9:56 AM