The Merciless Cropping of Squiggy 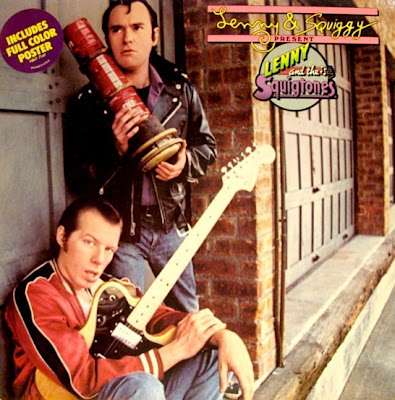 Phil writes in outraged, taking me to task for what he so memorably calls "the merciless cropping of Squiggy" from the recent photo of Michael McKean presented here on the "internet." In my defense, I will say a few things. First, that's the way I found the picture on the "internet." And to conclude, my brother and I had the Lenny and the Squigtones record and listened to it so many times that I still clearly recall at least the whole first verse to "Love Theme from the Creature Without a Head." So no disrespect toward Squiggy was intended! According to Phil, his wife (and why must he drag her into this?) posits Lenny and the Squigtones as the ideological (as evidenced by the parodic misogyny to follow) forerunners of Spinal Tap, making my omission (Spinal Tap was the subject of the "post" in question) all the more egregious. Bonus etymology: Did you know that "egregious" was originally meant to describe something really good, and that over the years the usage became increasingly ironic, until the opposite meaning replaced the original one? It's true! I also feel sure that "The Merciless Cropping of Squiggy" was a Victorian novel by Anonymous.

Posted by Jack Pendarvis at 5:07 PM