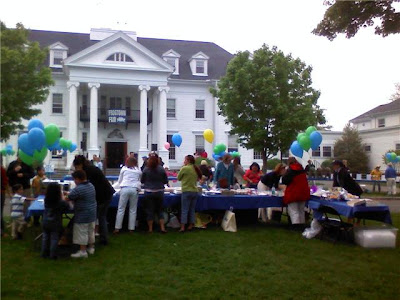 Welcome again to "McNeil's Rest Stop Ramblings." As I have mentioned before, they are pretty short for "ramblings." For example, this picture of the "Frogtown Fair" came only with a caption stating "Frogtown Fair!" There was a second dispatch in which McNeil tersely claimed to have witnessed a heated "tetherball dispute" at the Frogtown Fair. This does not give me much to go on. A quick Google search indicated that the Frogtown Fair best represented on the "internet" takes place in Toledo, Ohio. I am certain that McNeil was not heading in that direction. Further investigation led me to believe that perhaps McNeil is attending the Frogtown Fair in New Canaan, Connecticut. Wherever he is, I am glad he is not at the Frogtown Fair in Toledo, where - according to a local news service - Mayor Finkbeiner caused a scandal last August by leaving his dog in the car during a visit to the Frogtown Fair.
Posted by Jack Pendarvis at 12:41 PM