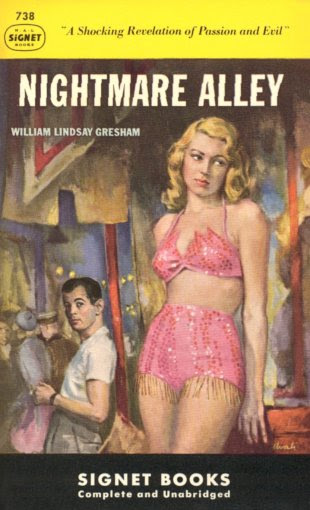 My attitude toward computers is on the upswing, and not just because by saying I wanted to meet Robert Osborne on my "myspace" page, I unwittingly put the wheels in motion to make it come true. Speaking of "myspace," a guy on there who calls himself "Comic Book Villain" clued me in to a new series about the Metal Men which seems to echo happily the guileless Metal Men of my youth rather than being all modern and exciting, with Metal Men cussing and so on. So that was nice of him and not noticeably villainous at all. How would I have found out about it otherwise? I am out of that "loop." Or I was. But not anymore, thanks to the magic of computing. So the main thing that has improved my computer mood is the computer's role in the resurgence of old-fashioned penpalism, that is, correspondence with nice strangers, sometimes resulting in bartering. For example, thanks to computers I was able to swap books through the actual US mail with Megan Abbott, likewise two of my books for a DVD of WE GO WAY BACK by Lynn Shelton, a fine film director I have gotten to know through "myspace," where our shared affection for Ingmar Bergman and Jerry Lewis was made manifest through our mutual enjoyment of this "clip." Plus Ms. Abbott informed me with her computer that the novel NIGHTMARE ALLEY, upon which my "fave" movie is based, is still in print thanks to the Library of America. And that's what I'm reading and loving now. In fact, I just put Chapter One of NIGHTMARE ALLEY on my syllabus for Ole Miss. All thanks to computers and the people who use them.
Posted by Jack Pendarvis at 2:23 PM