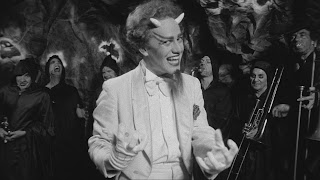 As we have mentioned here before, Barry B. has introduced me to a lot of my favorite cultural artifacts over the years. So pay heed as he weighs in on our current topic. I give you Barry B., to wit: "Hey, this question is always hard for me so I came up with three or four. I was thinking of movies that make me want to make a movie or really suck me in when I run across them on TV. A movie that always inspires me, which I could watch over and over (and have) is The Forbidden Zone by Richard Elfman. It's probably the closest thing to a live action cartoon I've ever seen. It does have bits of animation in it and is completely inspired by the Fleischers' cartoons which I love. The running time is awesome, around 75 or 80 minutes. I don't think there was any budget as the sets and backgrounds are mostly paper. First Danny Elfman score mixed in with Cab Calloway, etc. [pictured, Danny Elfman as a Calloway-inspired Devil in THE FORBIDDEN ZONE - ed.] On the other hand we have Once Upon a Time in the West which is incredible and I don't even really need to go on about but that made me think about how much I love The Good The Bad and The Ugly. This one is pretty out of left field but Good Bad and Ugly made me think of how much I love the original Dirty Harry. I have fond memories of watching that movie, I can't remember how many times, with my Granny when it aired on many Saturday nights on network television in the mid to late seventies. There's always West Side Story..." EDITOR'S NOTE: I was looking for a "link" to Barry B.'s mention of the Max Fleischer cartoons and discovered that the last time I "blogged" about Max Fleischer (see the "link" above) was EXACTLY ONE YEAR AGO TODAY. Also, I can personally attest to Barry B.'s love of WEST SIDE STORY, having viewed it with him at Atlanta's Fox Theatre one day when we were ditching work, several years ago. He, Caroline Young, and I used to be in a band that played a rudimentary version of the song "Cool" from WEST SIDE STORY.
Posted by Jack Pendarvis at 9:53 AM