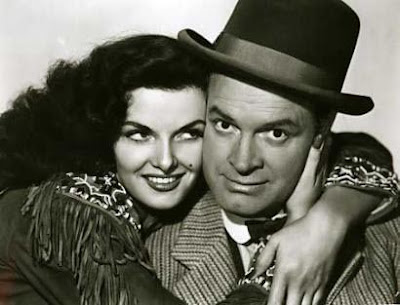 I have found another Jerry Lewis fan! She is none other than that author of true blue hardboiled pulp fiction, Megan Abbott. She and her husband Josh were passing through town and we had dinner tonight at the good old Ajax Diner. Coincidentally, Ms. Abbott spoke of the need to "surrender to Jerry" in terms quite similar to - yet entirely independent of - the recent self-brainwashing technique for learning to love Jerry Lewis that I outlined here recently. Megan, Josh, Theresa, and I had seen many of the same movies and we had a very nice time talking about them - THE FACTS OF LIFE, THE APARTMENT, ARTISTS AND MODELS, LAURA, FOOTLIGHT PARADE, NASHVILLE, ALL THAT HEAVEN ALLOWS, PILLOW TALK, and KISS ME, STUPID leap to mind, but there were perhaps dozens more that came up in conversation. Each couple recommended a movie that the other had not seen. Thanks to them, we will soon watch Carole Lombard in TRUE CONFESSION. Thanks to us, they will soon see Robert Mitchum, Jane Russell (pictured here with Bob Hope, who also came up quite a bit in tonight's conversation), and Vincent Price in HIS KIND OF WOMAN. We discussed the performance styles of (among many others) Mickey Rooney, Joan Crawford, Joel McCrea, Martha Raye, Bing Crosby, and Betty Hutton. Josh finds Betty Hutton a bit too ... energetic, shall we say. McNeil has the opposite feeling (Theresa and I wished that McNeil could have been around for tonight's conversation). McNeil reports having watched that Betty Hutton clip we recently "posted" (and present at the bottom of the current "post" for your convenient reference) dozens of times. He watched it again today, in fact. Now, we didn't ONLY talk about movies: we talked about TV - specifically the magnificence of MAD MEN and THE WIRE. Megan and Theresa also traded thoughts on Patricia Hearst's autobiography. After dinner, it was off to Square Books, where I goaded Josh into buying a copy of SMONK for a class he is about to teach on the "Southern Gothic" up in New York City. What a nice night!
Posted by Jack Pendarvis at 9:47 PM