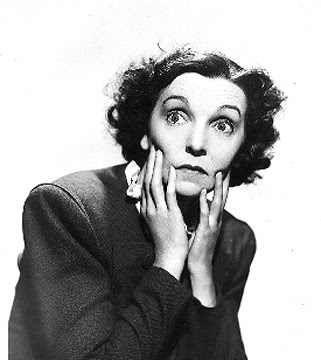 I have a lot of great backlogged responses to my "fave" movie question. I'll be getting to some more of them tomorrow. It has turned out to be more work than I thought! The fingers I use to cut-and-paste are becoming chapped. Also, I am trying to write a new book between "posts." But I could not resist going ahead and giving you the two cents of Mr. Ward, if only because his is the second "fave" movie so far to feature "blog" hero Arnold Stang. Now I give you Mr. Ward's response, in Mr. Ward's own cut-and-pasted words: "I've seen a lot of great movies in my lifetime, but my favorite is still 'It's a Mad, Mad, Mad, Mad World.' Most people don't even consider it a 'good' movie, in fact my own kids hate it. I don't care. Every time I hear that theme music it just makes me happy. I want it played at my funeral. [Mr. Ward is not being funny; we have heard him express this wish in person on several occasions - ed.] When I was a kid, I'd watch it with my parents and Grandmother every single time it was on TV. Grandma cracked up whenever Zazu Pitts appeared on screen. I believe, even then, she was probably Zazu's only living fan. [compare and contrast with Barry B. watching DIRTY HARRY with his granny - ed.] The opening credits are the best. The cartoon earth can barely contain the endless parade of star names that keep escaping from it. As you watch, you can't help thinking that with that many stars, why this just might turn out to be the funniest movie ever created! In fact, you should probably stop watching after the credits, because sadly, it's not. But again, I don't care." (Pictured, Zasu Pitts.)
Posted by Jack Pendarvis at 12:59 PM