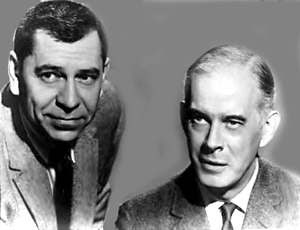 "Hey, Bartok looks a lot like Bill Gannon!" Jim Whorton writes to inform the "blog." "Bill Gannon was Jack Webb's sidekick on [the olden TV show] 'Dragnet,'" Jim continues. "I should have said Harry Morgan, I guess. But no, because Bartok only resembles Harry Morgan AS Bill Gannon. Remember, he was always trying to get Jack Webb to try some of his sandwich. Incidentally, did you know Jack Webb was an author? I got a 1st ed. of [one of his books] the other day. It is called 'The Badge' and reportedly includes all the true stories that were too racy for the original version of 'Dragnet.'" Thanks, Jim! This just the sort of "hip" reference to thrill all my new students when they flock "en masse" to my "blog." Or should I say "broken hip" reference? Ha ha! Wheeeeee! We're having fun now! (Pictured, Jack Webb and Bela Bartok.)
Posted by Jack Pendarvis at 6:28 AM