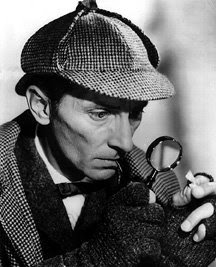 This morning while I was sleeping (another excellent technique for putting things off), Theresa was out in the yard, picking up an assortment of the napkins and white paper bags, pellucid with grease from the fried treats served up at the Chevron station on the corner (actually quite delicious; I'll "blog" about that some day), damp with dew, trash with which happy-go-lucky college students tend to liberally deface our lawn every night as they bellow and rant and shriek along their merry way down the sidewalk in front of our house after the closing of the bars while we are tucked up shivering with fear in our bed for all the world like an elderly couple upon whom a strange new world is encroaching... where was I? Oh yes. This morning, Theresa was in the yard, muttering under her breath about environmentalism and such, perhaps cursing, she admits, and picking up litter, when she glanced up and saw a deer standing by our front window, ten feet or less away. Theresa moved closer. The deer did not seem frightened. In fact, it appeared oblivious. It took a second for Theresa to register that she was looking at a deer. The first image that popped into her head, she said, was the Hound of the Baskervilles. The general gloom of the cloudy, windy morning contributed to this impression, she reported. The deer remained unconcerned. It slowly walked across the road. Theresa walked behind it, still picking up paper. The deer vanished. The street was quiet. "It was a long moment," Theresa said. (Pictured, Peter Cushing as Sherlock Holmes in a publicity still from the Hammer films production THE HOUND OF THE BASKERVILLES.)
Posted by Jack Pendarvis at 8:20 AM