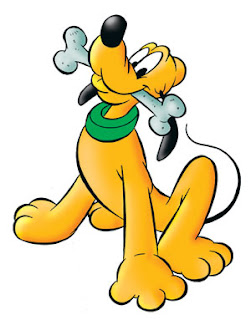 Our "internet" pal from "She Blogged By Night" leaps to McNeil's defense re: the Goofy dust-up. "McNeil is confusing Goofy with Pluto," she asserts. "The cartoon dog, not the planet which isn't actually a planet anymore. Common mistake. They're at least cousins, hence the resemblance." She also kindly includes the present illustration to bolster McNeil's cause. Yes, yes, "She Blogged By Night," it's a fine theory. And at one point in our conversation, McNeil even said, "Maybe I'm thinking of Pluto." BUT! Thereafter, I took great pains to explain the difference between Goofy and Pluto to the stubborn McNeil. And he PERSISTED in his claim that Goofy does not wear a hat. "Goofy's the one with the teeth, right?" said McNeil. This I affirmed. "He doesn't wear a hat," McNeil stated with an air of calm finality.
Posted by Jack Pendarvis at 7:39 AM