We Were Also Lucky 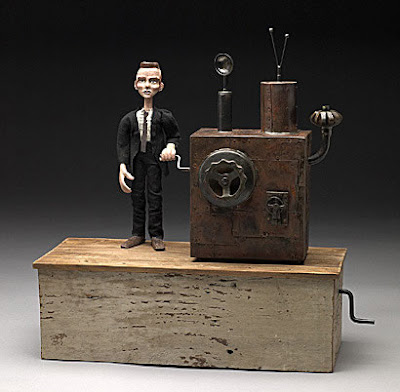 We were also lucky enough to spend some time catching up with our old friends Tom Haney and Paula Joerling. Both are artists. Tom built all the marionettes for the Rudy & GoGo Show. Paula, who works in a number of media, carved and painted one especially important prop for us, "Cowboy Sally's Magic Box." (Cowboy Sally was portrayed by Sally Timms. She named one of her solo CDs after the character.) The Magic Box that Paula made is on our mantel now and if only I had a camera phone you could see it for yourself in all its glory and be so very happy. The sun shines in the window and causes the strategically placed rhinestones to sparkle. I don't suppose I could capture the effect anyway. It would be like that time with the ginger ale. Tom and Paula are the nicest people in the world and we are sorry we haven't seen them since moving out of the big city. But Paula says they have been "invited to a party in Arkansas," so they'll stop in Oxford on their way. Tom describes his work as "automata." Some of it, like the piece pictured above ("The Rainmaker"), is meant to be cranked by hand. We were happy to hear that Tom's work will be featured in a show at the Mason Murer Gallery in Atlanta. The opening is September 26. Mark it down! (Below, Cowboy Sally.)

Posted by Jack Pendarvis at 3:54 PM