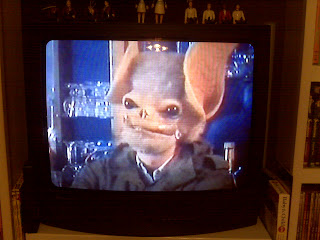 We're back from our trip. On the drive to Atlanta, when we were in or near Adamsville, Alabama, I saw a big sign that said "ELECT JOHNNY CLICK MAYOR." And I thought, you know, I WOULD vote for somebody named Johnny Click. It would be almost impossible NOT to vote for somebody named Johnny Click. Of course, I suppose I would have to agree with his policies and such. I SUPPOSE! (NOTE: I do NOT endorse the candidacy of Johnny Click for mayor of Adamsville, Alabama, if indeed that is where he is running. I know NOTHING about Johnny Click except his name, which I love. It sounds like the nickname of a character in some Martin Scorsese movie, a nickname he earned after his gun misfired at a crucial moment. But I have not looked him up on the "internet" and I cannot say where he stands politically. Please see my earlier, similar disavowals of fascinating entities of unknown affiliation such as the Emin and Pastor Melissa Scott.) If I had a camera phone, like my more sophisticated friends, I might have "posted" a photo of the big sign "ELECT JOHNNY CLICK MAYOR." Instead, here is something from Phil's camera phone. It is Phil's TV! He was watching a movie called TWISTER'S REVENGE. Here's what Phil said in an email: "I'm watching this monster-truck-meets-Knight-Rider dvd when this bat appears sitting at a bar for no reason whatsoever. Did I dream this?"
Posted by Jack Pendarvis at 7:12 AM