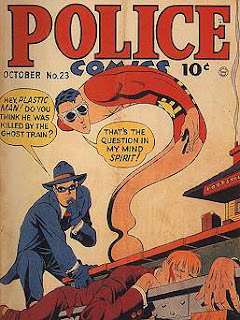 I was casually "clicking" through the "blog's" various references to Pia Z. Ehrhardt today when I noticed a few things. One was a reference to "Bloggy" the "Blog" mascot. This character is a good idea! But apparently I thought of him (her?) one day in 2006 and never again... until now. On another of my "clicks," (a leap from Pia Z. Ehrhardt to Tom Franklin), I saw a picture of Plastic Man (re-"posted" here for your reference). And it made me remember something I need to address. Until recently, I have been putting illustrations on my "blog" by "stealing bandwidth"! I didn't know what that was! And to tell you the truth, I still don't. BECAUSE I'M OLD! I can't understand things like this. I don't even know what bandwidth is! I used to get uptight. Once I "stole bandwidth" somehow with a picture of Jon Lovitz that some fellow had scanned off his television. It was removed from the "blog" (by that guy, I assume). And I could not understand (and still cannot to some extent, I'll admit) why it was okay for that guy to steal a picture of Jon Lovitz from his television set yet he was so stingy about letting me use it on my "blog." Things started to become clearer to me when I was providing you, my loyal "blog" readers (Ha ha ha! Wheeeee!) with a "link" to one of my previous "posts" about the movie DEVIL DOLL. And I saw that the people whose "web" site I had (unknowingly) "stolen the bandwidth" from had replaced a still from the relevant scene with a picture of a nude young woman! As punishment for stealing! This aggravated me! Though I began to understand that I had been "stealing" something (though I still can't figure out what - BECAUSE I'M AN OLD, OLD MAN!), I thought it was rude of those fellows to plaster an objectionable image on my "web" site when a stern warning would have worked just as well. (Also, you should note, there may be other naked women, of which I am unaware, festooning older "posts" without my knowledge. I found one replacing a photo of the character actor Wilfrid Hyde-White the other day - quite a contrast!) I hope to undertake a mammoth project soon, in which I replace any "stolen bandwidth" with "rightfully acquired bandwidth." As an example, I have included the Plastic Man comic book cover here, and I have done so in the approved fashion. (Hyde-White has also been replaced by a properly ______ [see? I don't even know the correct word. BECAUSE I'M OLD!] image.) Hey, you know what's funny? It just occurred to me as I was typing this (having already chosen the illustration) that Plastic Man's secret identity, Eel O'Brien, is that of a reformed thief! I must be the greatest "blogger" ever.
Posted by Jack Pendarvis at 8:35 AM