The Chimerical Safety Deposit Box of the Little Dog 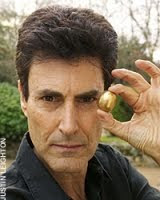 There's this commercial where this dog is worried about his bone so he puts it in a safety deposit box but that's not good enough because when the dog gets home from the bank he goes to sleep and dreams about his bone and his safety deposit box, and the funny part is how worried the dog looks while he's sleeping in his dog bed and tossing to and fro worrying about his bone, which dances half-dissolved in a dream over his head, and then the empty safety deposit box appears in a similarly chimerical fashion and he (the little dog) even puts his little paws over his face in consternation. I like that commercial! Too often I focus on what I don't like in the difficult world of commercials, such as the people who dress as nature and wave their arms, and the staring terrifying angel of purification, full of a holy and cataclysmic flame of righteousness. But I did like the one about the money clip and the radio ad for the friendliest hardware store in Ohatchee.
Posted by Jack Pendarvis at 9:27 PM