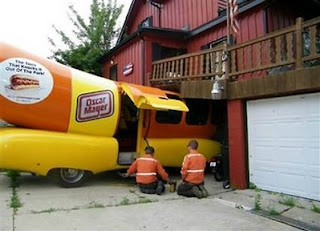 It's McNeil's birthday, and you know what that means: an expanded edition of "McNeil Month By Month," the only place on the "internet" to see what McNeil has been doing month by month, via a "post" about McNeil from each month that the "blog" has been in existence. In keeping with the "blog's" new policy, we use a random illustration, but in honor of McNeil's birth, it is not as random as usual, because we will keep hitting the button until we find one that has something to do however slightly with some of the subject matter of "McNeil Month By Month." Well, it turned out to be the Wienermobile after it crashed into a house, which has nothing to do with McNeil, but we think McNeil will like it. And with that, we give you "McNeil Month By Month." From September 2006: McNeil contends that he does not enjoy the "Little Dot" comic book. October 2006: McNeil furnishes a memorable quotation. November 2006: McNeil recalls playing Aerosmith on a jukebox. December 2006: First appearance of "McNeil's Movie Korner." January 2007: McNeil's system for winning at craps. February 2007: McNeil doesn't see what's so hard about reading a newspaper and eating a sandwich at the same time. March 2007: McNeil and I are talking about Bob Denver when HE SUDDENLY APPEARS ON TELEVISION! April 2007: Wild turkeys roam McNeil's neighborhood. May 2007: McNeil gets in touch with an Australian reporter regarding a historical chimp. June 2007: First McNeil's Movie Korner Film Festival announced. July 2007: Medicine changes McNeil's taste buds. August 2007: McNeil's trees not producing apples. September 2007: McNeil pinpoints a problem with the "blog." October 2007: McNeil presents a video entitled "Jerry's pre-defecation chills." November 2007: McNeil's Theory of Potential Energy. December 2007: What is McNeil's favorite movie? January 2008: McNeil explains why the wind blows. February 2008: McNeil admires the paintings of Gerhard Richter. March 2008: McNeil comes up with an idea for a Lifetime TV movie. April 2008: McNeil's shirt. May 2008: McNeil's apple tree doing better (see August 2007). June 2008: McNeil is troubled by a man who wants to make clouds in the shape of logos. July 2008: McNeil's apples are doing great. August 2008: McNeil refuses to acknowledge that Goofy wears a hat no matter what I say. September 2008: McNeil's grocery store is permanently out of his favorite margarine. October 2008: McNeil on the space elevator. November 2008: McNeil comes across an incomplete episode guide to HELLO, LARRY. December 2008: McNeil thinks the human hand should have more fingers. January 2009: McNeil discovers that gin and raisins cure arthritis. February 2009: McNeil sees a ****** ******* awesome rainbow. March 2009: McNeil wants a job on a cruise ship. April 2009: McNeil attempts to rescue a wayward balloon. May 2009: McNeil visits the Frogtown Fair. June 2009: McNeil dreams he is watching an endless production number from LI'L ABNER. July 2009: McNeil sends text messages from his cell phone while watching a Frank Sinatra movie. August 2009: McNeil disagrees philosophically with a comic book cover that shows a mad scientist putting a gorilla's brain in a superhero's body. September 2009: McNeil resembles famed boxing trainer Freddie Roach. October 2009: McNeil's birthday celebrated with an expanded edition of "McNeil Month By Month."
Posted by Jack Pendarvis at 4:29 PM