Frankie Avalon Gets Stabbed In a Place 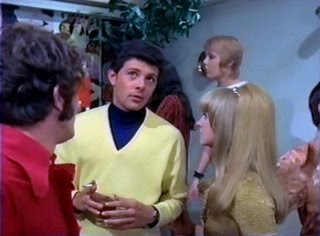 I know you always care what movies Theresa and I watch for Halloween! This year we have been busy, so just three so far: THE RETURN OF DRACULA (1958), NIGHT MONSTER (1942), and THE HAUNTED HOUSE OF HORROR (1969). The latter takes place at a party at a "flat" decorated by the same people who did THERE'S A GIRL IN MY SOUP. Everyone is wearing a turquoise velvet jacket and a canary yellow shirt with ruffles or some variation thereof, just like in DRACULA A.D. 1972. (I am starting to think we need some non-random pictures to illustrate this "post.") Well, nothing happens for about 40 minutes (they just put on some records and dance in a bored way at their mod pad) and then - SPOILER ALERT! - people start getting stabbed. I guess I have already ruined it for you in the title of this "post," which is something I try hard not to do, but I suppose I thought the title was just so cute I couldn't help it. Because, you know, at first you think Frankie Avalon is going to get out of the haunted house relatively okay (oh, after the party they go to a haunted house) but then he gets stabbed in an awful place you would never believe, a place in which you never thought you'd see Frankie Avalon get stabbed, and I can't bring myself to tell. I must say (more spoiler alerts) it's nice that no ladies get stabbed. All gentlemen for a change. I also found out that stabbing makes me nervous even in a bad movie. Stabbing is not funny, people! Plus the colors were nice, and some ambitious shots were undertaken, so maybe I detected a little Bava influence. I'll let you know if we end up watching any other scary movies for Halloween because I know how much you care. I love you! Goodbye! 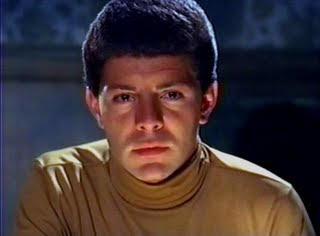 Posted by Jack Pendarvis at 6:36 AM