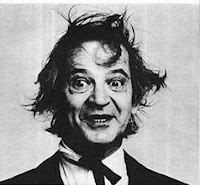 Welcome once again to "All-Star Entertainment Wrap-Up," where we report all the latest in sparkling entertainment news from the sparkling world of entertainment. Mr. Ward read in the New York Post that Professor Irwin Corey "had to be removed from the podium [at the memorial service for Soupy Sales] after his eulogy turned into a diatribe about health-care reform." To which Mr. Ward responded, and I quote, "Professor Irwin Corey? PROFESSOR IRWIN COREY?!!?!! How can he possibly still be alive?! He was a thousand years old back when he was famous... well, maybe 'famous' isn’t the correct word. But seriously, he’s complaining about our health care system!? If that guy’s still breathing and moving I think our health care system must be working pretty d*** well." Mr. Ward emailed me about this matter because, as he noted, we are the last two people alive who remember Professor Irwin Corey. Well, maybe Phil. Still, perhaps Mr. Ward (and the New York Post) are being a little hard on Professor Irwin Corey, who was in CAR WASH, a movie I love, and certainly has a right to his opinions - and his long, healthy life! I will include a non-random picture of Professor Irwin Corey so you can be doubly sure you have never heard of or seen Professor Irwin Corey, as if I had to ask. That's it for "All-Star Entertainment Wrap-Up!" Until next time, keep "reaching" for the "stars!"
Posted by Jack Pendarvis at 1:56 PM