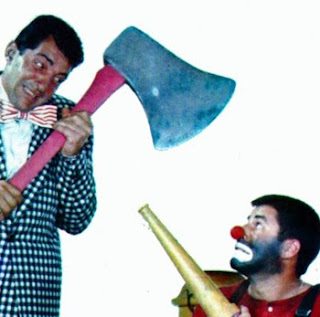 Have you heard about this thing called the kindle? All the kids are saying it is the hip new thing and you can read books on it and everything. Supposedly my interminably delayed new novel SHUT UP, UGLY has been put out in kindle form, if no other form, but no one will tell me. Probably for my own good! They are probably sitting around a big table saying, "It's for his own good! What he doesn't know won't hurt him! Let's light some cigars with these hundred dollar bills!" But it's odd because I don't remember anyone asking me if I wanted my book to go on the kindle. To make things extra confusing, they have goofed up again, like the time they said my prior novel was about how Emperor Justinian "failed to establish good relations with the kings of the western Mediterranean," which it was not, but gosh did that look exciting in the description section. The kindle version of SHUT UP, UGLY is receiving customer reviews like, "This earnest book has everything from suspense, drama, action and even some comedy that will have your cheeks hurting from laughing," and "This debut by Mike Warren has all the elements that make for a steamy novel. Sex, sex and more sex, also lie's, deceit, cheating along with some mayhem," and "I didn't realize there would be SO much sex in it. Seems like 40% of the book," and "I was disappointed in the infidelity, adultery, cursing, foul language, fighting, cruelty, lying and general lack of any morals. And then he'd pray. ? ? ?" (that one was a five-star review!) and "It wouldn't surprise me if Mike Warren gained a few enemies after writing the intense military drama, A Private Affair. I mean, what would you expect after writing a novel exploiting the undercover homosexual love affairs of men in the United States Armed Forces?" And that all sounds fine except not a word of it has anything to do with my book (every trace of which has been weirdly removed from my "author's page" at the place where kindles are sold, though it supposedly - by their own account! - exists at least in kindle form). I am filled with confidence that things are being handled, though by whom and to what end I cannot say.
Posted by Jack Pendarvis at 6:17 AM