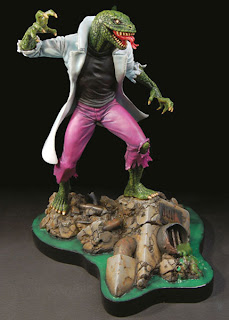 Now that the mighty hodag of Rhinelander, Wisconsin, has taken over for the retiring unicorn as the official monster of the "blog," everybody's local monster seems to be elbowing his or her way in for recognition. For example, a facebook friend named Pamela brings forth a certain Lizard Man of Newberry, South Carolina. According to wikipedia, he is "seven feet tall, bipedal, and well built," which makes me laugh and laugh for some reason. Curious about the Lizard Man of Newberry, I did some "googling" and found a site containing this intriguing passage: "my friend, North Carolina-based writer/researcher/fight choreographer/adventurer Patrick Green sent me an email discussing lunch plans we had made. Everything in the email seemed casual enough, save the following line..." I won't tell you the following line! You have to "click" for yourself. But it concerns the Lizard Man. (Pictured, the Lizard - not to be confused with the Lizard Man - who used to tussle with Spider-Man and still does, for all I know. His jacket looks a lot nicer than I remember. I believe it used to be a fairly plain lab coat in my day.) PS: Don't worry, hodag! You are still number one with me.
Posted by Jack Pendarvis at 10:48 AM