We Have a Winner 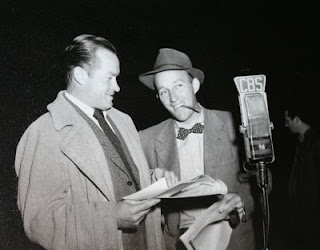 As you know, part of my morning ritual is checking the New York Times for Jerry Lewis references. But today, unpaid "blog" intern Brian Z. beat me to it. As he reports, Manohla Dargis has written a review in which Jerry Lewis appears in the FIRST SENTENCE and Bob Hope in the FIRST PARAGRAPH! In the course of investigating Brian Z.'s claim, I was able to ascertain that other "blog" "faves" - namely Bing Crosby (pictured, with Hope), Mel Brooks, and Oliver Platt - are featured prominently as well. With this, I believe that Ms. Dargis has surpassed even Dave Kehr as the most faithful Jerry acolyte at the New York Times. I believe we will award her the crown and bring our long-running contest to a close. PS: THE BELIEVER magazine deserves some recognition here. As I mentioned yesterday (see the Jerry "link" above) Jerry Lewis received a passing mention in the current issue. As careful "blog" readers will no doubt recall, Jerry Lewis was also mentioned in the previous issue of the BELIEVER. Two issues in a row! And several years ago they published a long piece that ran over the course of two issues, an insightful analysis of Jerry's career by B. Kite. I don't think it has been reprinted in its entirety on the "internet," but it's work seeking out. In answer to your question, yes, this is what I do with my life.
Posted by Jack Pendarvis at 7:26 AM