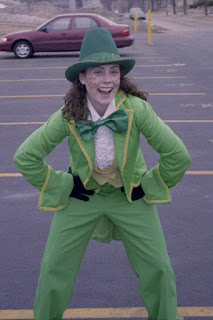 My squonk informant (we'll call her "Informant J2") tells me that the entire text of FEARSOME CREATURES OF THE LUMBERWOODS by William T. Cox is available on the "internet," much like THE COMPLETE BOOK OF CHEESE by Bob Brown. The former is where she gleaned her squonk information, and there are some hodags in there as well. I have leafed through the electronic pages and must say that I part ways with Mr. Cox on the subject of leprechauns. If I am reading him correctly, he is saying that leprechauns were jolly and prone to innocent frolicking in the old country and turned surly when they moved to Canada. If I may quote, "Teamsters toting supplies across swamp roads have been attacked by the animal, which would bound clear over the load, snapping its teeth at the driver and reaching for him with its villainous claws." But in my readings the "little people" were never that nice to begin with. For example, THE SECRET COMMONWEALTH, a book of folklore compiled in the late 1600s by Robert Kirk, contends that such "subterranean and for the most part invisible people" are "ever readiest to go on hurtful errands." According to Reverend Kirk's research, they also live in "continual sadness." (Pictured is "Bloggy" the "Blog" Mascot, as always the exception that proves the rule.) In other monster news, our friend Sepsey writes in to say that there was recently a good monster story in THE NEW YORKER magazine.
Posted by Jack Pendarvis at 8:36 PM