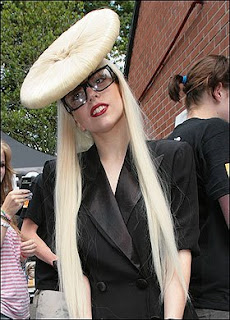 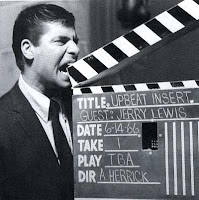 Let's see what's going on with Jerry Lewis today. Last night Brian Z. reported (and it has been confirmed today by the New York Times in their "Arts, Briefly" section - not to be confused with our "Arts, Briefly" section - where I read yesterday [in the former] about the "pyrotechnics bursting from" Lady Gaga's costume) that Jerry Lewis is going to Broadway, to direct a musical version of THE NUTTY PROFESSOR. His collaborator is Marvin Hamlisch, a person I once frightened on an elevator. In other Jerry news, the month-long Cinefamily film festival has come to an end. But according to the Cinefamily twitter account, they are on the trail of some lustrous prints of THREE ON A COUCH and THE BIG MOUTH. Yes, they are going to keep the Jerry party rolling if at all possible. Surely Cinefamily is the greatest movie theater in the world. (Pictured, Lady Gaga - I still don't know who she is - looking like she stepped out of a Frank Tashlin movie; Jerry; Marvin Hamlisch.) 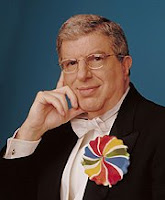 Posted by Jack Pendarvis at 6:23 AM