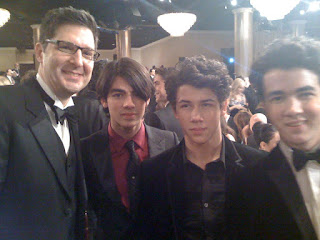 Which "Blog" Buddy was recently spotted sporting a sassy new "do" on late night TV? (Sometimes I like to "blog" like Walter Winchell.) Kelly Hogan, that's who! She was singing with Neko Case on the Conan O'Brien program and had kind of a Louise Brooks thing going on in the hair department. Now, yours truly usually sticks with David Letterman, whose musical guests tonight were the Jonas Brothers (seen here in the company of "Blog" Buddy Mark Osborne), but I made the switch during the final segment so I could say hello to Kelly through the magic of the TV airwaves. Afterward, I switched to a Frasier rerun because I knew that's what Kelly would want. And which one should it be but novelist Tom Franklin's very favorite Frasier episode, as revealed in our previous edition of "Frasier, Briefly"? Frasier's persnickety brother Niles mentioned the viola, and I was like, "The viola is a heck of an instrument. I should do for it what I did for the bass clarinet." And that made me think of the great Mel Brooks routine in which he calls a nectarine "a **** of a fruit." And you know, it really is.