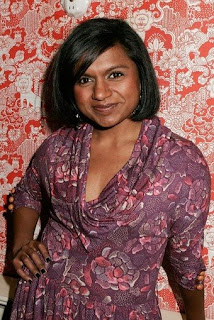 My sister has written to explain the commercial that confused me so much. She is young and able to understand things. "It is supposed to mean you never get the results you want. But I was confused, too," she admits. My sister thought the people in the commercial were having fun before she "realized it was supposed to be bad." Hey, let's turn this into a "media report." Because I got an email from Phil, who recommends a book called THE TIME MACHINE DID IT by John Swartzwelder. Phil says he learned about the book from the "blog" of Mindy Kaling (pictured) who appears on the TV program THE OFFICE. Her "blog," says Phil, is about things she buys, such as (as Phil notes) "even some kind of urinary tract infection cream (it ameliorates the condition; it doesn’t cause it). I think she’s hilarious." [It appears to be a tablet, not a cream. - ed.] Phil's email caused me to research Ms. Kaling and I discovered that I own a copy of a hilarious play she co-wrote (with Brenda Withers) and I didn't even know that was her! I bought it a long time ago, before I would have had any reason to be aware of Ms. Kaling. It's called MATT & BEN and is published by Tusk Books, a division of the Overlook Press. Check it out. It has an ampersand in the title, one of our favorite things. Now we have covered commercials, books, "blogs," TV shows, plays, and ampersands. I believe that is all of the media. We have run out.
Posted by Jack Pendarvis at 9:36 AM