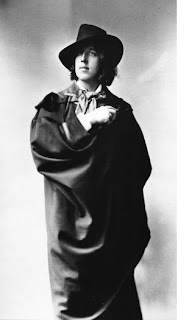 I don't think the "web" site called the gawker (which, as you will recall, I discovered because of our shared interest in donuts and monkeys) is copying me, but I do believe we share some coincidental concerns. I recently "scooped" them pretty handily on two stories they reported today: the wienermobile crash and the one about how much the Pope loves Oscar Wilde. Oscar Mayer and Oscar Wilde! Two fine Oscars. So today we have had one "post" with Oscar Wilde and Oscar Mayer, and another "post" with Jerry Lewis and Jerry Springer. What can all this strange symmetry mean? Something about the end of the world is my usual guess.
Posted by Jack Pendarvis at 6:30 PM