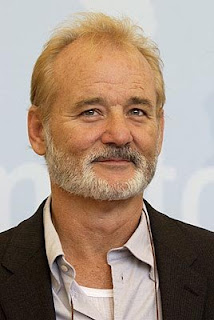 "I didn't want to sway your readers before, but here's the truth," writes Dr. "M." It turns out her last edition of "Actor Bits" - about MEATBALLS star Chris Makepeace - was seething with subtext! As evidence, Dr. "M." goes on in her note to dispense some of her famous vitriol in the direction of the then-young performer, whose chops, she feels, were no match for "the superbly comedic Bill Murray" (pictured), with whom he appeared in the film. Dr. "M." says she found herself yelling like so at the TV this weekend: "C'mon, Makepeace. Act! Enunciate!" Her yelling went unheeded by the characters on the screen, she reports. At least she didn't say, "He has mounted his hind legs and blown crass vapidities through the bowel of his neck."
Posted by Jack Pendarvis at 4:48 PM